Sadie is vivacious, fresh and youthful. 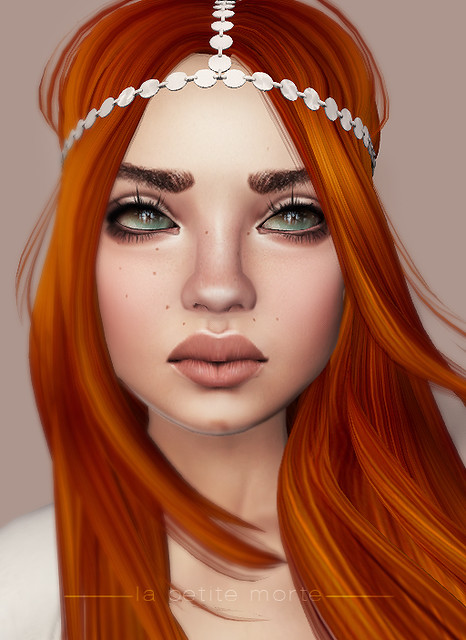 Maja is sultry, lush and sophisticated. 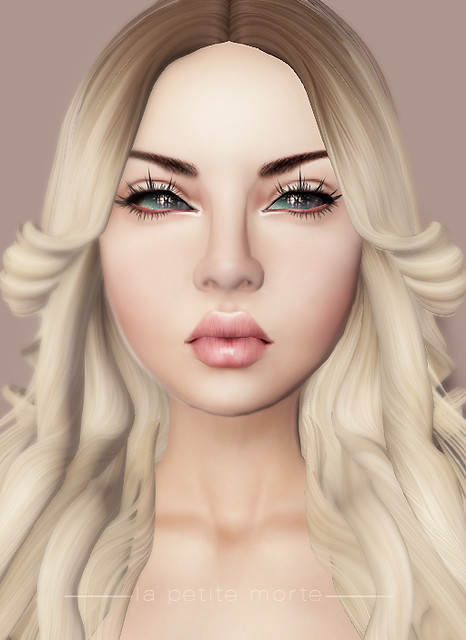 To demo or purchase either (or both!) Maja or Sadie, please visit Skin Fair. Nyam Nyam and Loud Mouth appliers are available for both skins in the Skin Fair booth. You’ll find LPM on Sim 2 at Skin Fair 2015.

For all other appliers, please visit the La Petite Morte mainstore. 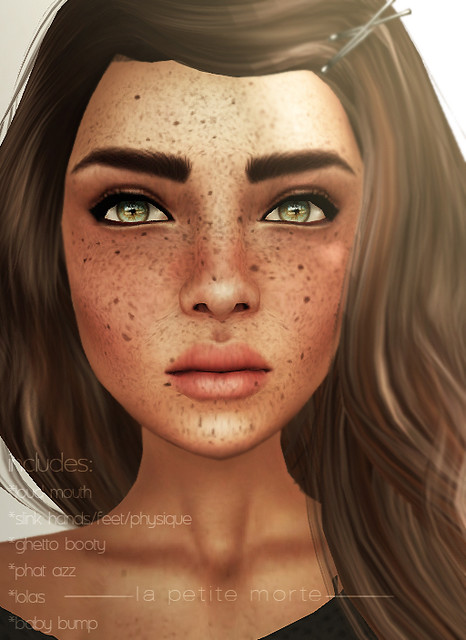 A new skin is available at the Seasons Story for only 450L! It includes slink hands, feet, and body, lolas, phat azz, ghetto booty, baby bump and loud mouth appliers.

Ellen is a fun sun loving skin with lots of freckles (yay!) dotting her adorable face and upper body. Come try a demo! 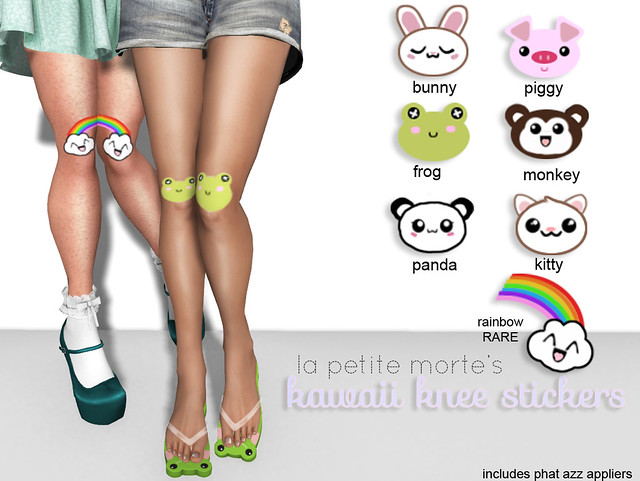 Also available is a small gacha which features kawaii stickers for your knees! 20L a play you get a tattoo layer and applier for your phat azz.

Lasting from now till 12:01 AM on the 27th, now is the time to come check La Petite Morte!

La Petite Morte is now participating in Lazy Sundays, where items are marked 75L or lower. This week we have a special Lazy Sunday edition of Elisa, which includes Tangos and Lush appliers.

A special guitar pose prop is now available at the Soho Sample Sale for 169L. It includes 5 wearable poses, along with 5 standalone poses and a guitar to rezz so you may photograph others as well! The guitar is mesh, so will need a mesh enabled viewer.

Although the mainstore is closed, that doesn’t mean that there aren’t new releases from La Petite Morte. In fact 2 new full skin lines are available, a special edition, and makeup line.

First up we have Neve available only at The Boutique. Comes in 3 tones, brow/no brow option, cleavage/no cleavage for 699L. Taxi to The Boutique

Also a very special edition of Ophelia is available with 50% of the proceeds going to the Sophie Lancaster Foundation. It includes all 3 tones, brow/no brow, cleavage/no cleavage options….all for 699L.

With 100% of the proceeds going to the Sophie Lancaster Foundation, LPM is offering a pack of 7 glitter shadows for 100L.

Last and certainly not least is the opening of Genre! This month’s theme is Sci-Fi and LPM has a special edition of Ophelia available for 100L. TP to Genre

Also I wanted to take a moment to thank everyone for their warm support to me and my kitty Alli. It all has really meant a lot to me. For a full update please check the store blog: https://lapetitemortesl.wordpress.com/

This is gonna be a bit wordy but please bear with me.

I’m sure you are asking who Alli is, let me introduce you to her.

Alli (short for Alligator) is our beloved kitty. She’s a lil hellion but when she’s in the mood to give lovings, there’s no one better than she is. She’s always been a daddy’s girl, and in fact picked out my boyfriend when we had gone to visit the Humane Society. We had gone JUST to look (according to bf), and what happens? He ends up falling in love. She was already on hold for someone else but it was destiny that my boyfriend and Alli were to be together. We were next on the list for her, and as soon as the adoption fell through we ran to get her. It was a big adjustment for our (MY) kitty to accept the new little one, but eventually her tolerance gave way to a friendship. Although Drake is still a bitch, Alli knows just how to get Drake and they love to have their play times.

Recently my boyfriend and I made a major move, we moved 3000 miles in order to be closer to my mom. The drive (yeeees we drove a truck down with 2 cats!) was difficult, but we finally arrived to our new home. The cats settled in right away, almost demanding to go outside within 10 min of arrival. Alli is a very independent cat, and does not tolerate attention when she doesn’t want it. However, 2 days ago she comes home and right away we notice something isn’t right. She isn’t her usual energetic self and wasn’t that interested in her food. She went to lay on down on our bed and didn’t move from there for over 24 hours. We became frantic. We knew something was wrong but we didn’t know what. I started calling around to different vets to try to find someone who was somewhat reasonable. (Due to the move and the new job not started yet money is VERY tight). Finally I found someone who was close by and although it was an emergency and we had to pay an emergency price, we felt it was worth it, as our cats are our children. When we got there it turns out Alli was running a 104 degree (F) temperature and was obviously very sick. But in order to just get the basics done to test what was wrong with our Alli, it would run us around 600 dollars. We just didn’t have that amount. Unfortunately we had to go with the bare minimum of one shot and water under the skin treatment, which still cost us 300 dollars. We walked out of there frustrated not only because we couldn’t afford to find out what was wrong with our Alli goobers, but the vet talked down to us due to the fact we couldn’t pay for everything. They didn’t accept a payment plan and were unwilling to work with us at all. We just crossed our fingers and toes hoping that the general antibiotic would help.

As soon as we got home, Alli went under the couch to hide. I was hysterical, because we’ve all been told when an animal wants to be alone means. We left her alone for a couple hours and then peeked on her to check how she was doing. She came out from under the couch but something else was wrong. She couldn’t walk on her back legs. She was falling over and had absolutely no balance. We carried her back to our bed and that’s where she’s been since. She is obviously in a lot of pain, and is refusing food and water. Every couple hours I will take a small syringe (no needle of course) and shoot a small amount of water into her mouth to try to keep her from becoming completely dehydrated. I have called around to every vet I could find in our area to see if they would work with us, and accept a payment plan. It was like hitting a brick wall. The few that did have a ‘payment plan’ was through creditcare, which is basically a credit card for medical expenses. Needless to say, we were declined.

As a last resort I called the Humane Society hoping they’d know of a vet that would be willing to work out something. Fortunately there is someone. They do payment plans, which will be worked out after the initial exam, but half of it must be covered up front. We are completely broke. We have enough money to cover our rent for this coming month and that’s it. The money has run out. I have no idea what the final cost will be, but we are doing whatever it takes to make sure our Alli gets the treatment she needs. One of these things that I am doing is having a special edition skin available based on the popular Wixson for 100L and a special Cat Face Tattoo for 10L. If you like the skin and/or tattoo and purchase it, thank you. From the bottom of my heart. If it isn’t to your liking? Thank you…again from the bottom of my heart for taking the time to read this. It really means a lot.

First up we have Genre! Family-Unconditional Love is the theme for this round, and La Petite Morte has created a special edition skin, shape and tattoo! Everything 100L and under!

Appliers for lolas tangos, and slinks hands and feet are also available for this special edition.

4 shapes in one….a regular non-preggers shape plus 3 others for your trimesters if you so choose to use.

TRANSFER! So you may share this tattoo with your BFF!

Next up is NYC Soho Sample Sale! I am a great lover of music and was inspired to make music tattoos and piercings!

Last but not least, the flash birthday sale is still open for the next couple hours till I am able to get back around and change things back, so if you haven’t gone yet be sure to check it out.

ALL Single Skins are marked down to 50L!

La Petite Morte is pleased to release the full skin line of Wixson. Inspired by the model Lindsey Wixson, Wixson comes with a teeth tattoo layer, as well as a gap between the front teeth when you smile.

Don’t forget that Genre has a special edition of Wixson for only 100L per makeup! 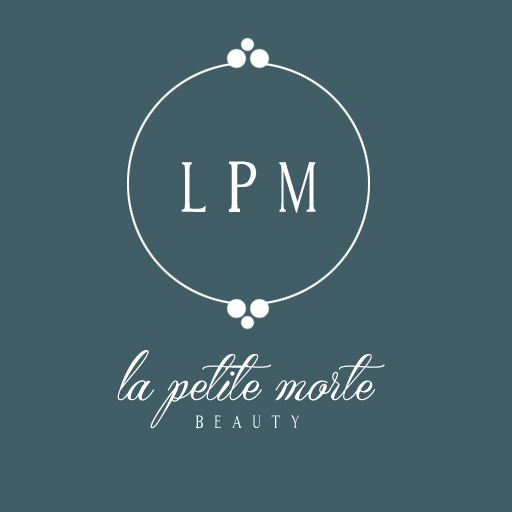